A message from our CEO about the future of Stack Overflow and Stack Exchange. Read now.

Is this sonority hierarchy correct? 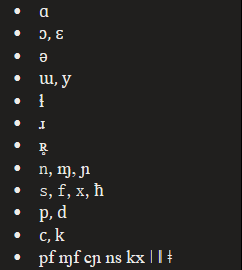 I need to sort these phonemes properly before I get into clusters and making syllables, but I'm not sure I did it right.

Sonority refers to the amplitude of the sound signal; ie the louder a sound is, the higher it ranks. Vowels are loudest, as they are voiced and generally less constricted than most consonants. Within the vowels, the open ones (eg /a/), are louder than the closed ones (/i/, /u/). Then laterals, nasals, fricatives, and finally plosives. Within each of these groups (where applicable) the voiced variant is higher than the voiceless one (eg /g/ > /k/, and /d/ > /t/).

This matches the ranking in your image, so I would say it is correct.

Not the answer you're looking for? Browse other questions tagged phonotactics or ask your own question.

4
What decides where is the break between syllables?