Is any of the Wakandan writing in Black Panther used for something other than English?

For the film Black Panther production designer Hannah Beachler created a Wakandan writing system partially based on real African writing systems. Well that's what this and other news articles say, but if you look at how it's used, for example in the film's intertitles, it's clearly only a transliteration alphabet of English:

You can see here how the letters are 1-1 mappings of the very non-phonemic English spellings.

Now in the film, when the characters aren't speaking English, they are actually speaking Xhosa. (I'm not sure if in-universe that they are meant to be speaking Xhosa, or if Xhosa is just used to represent what would be a distinct Wakandan language in-universe, possibly related to Xhosa.)

Is any of the Wakandan writing in the film used to write Xhosa? Or any other African language, or even an actual conlang?

writing-systems classification
Share
Improve this question
asked May 2 '18 at 11:54

It's important to note that there were two Wakandan scripts used in the set design of Black Panther -- one is the transliteration alphabet seen here, while the other is a se of symbols based on Nsibidi that is more logographic in nature. They were used on different parts of the set, with the more logographic script occurring in a lot of the more traditional contexts and the alphabet occurring more widely throughout the set.

The Omniglot page for the script includes text written in both English and Xhosa using the script, but the Xhosa text seems transliterated from the romanized orthography for Xhosa. That said, since the author described the alphabetic script as a "more evolved" version of the logography, it's possible that it was deliberately designed to be similar to the Latin transliteration of Xhosa? Granted, that doesn't seem particularly in-character for the Wakanda depicted in the film, but who knows. Perhaps we'll learn more about the script in the inevitable sequel.

I think we can say that the alphabetic script is not only used to transliterate English as it is in the title cards. Consider this image from the article, which features portions of some Wakandan signs: 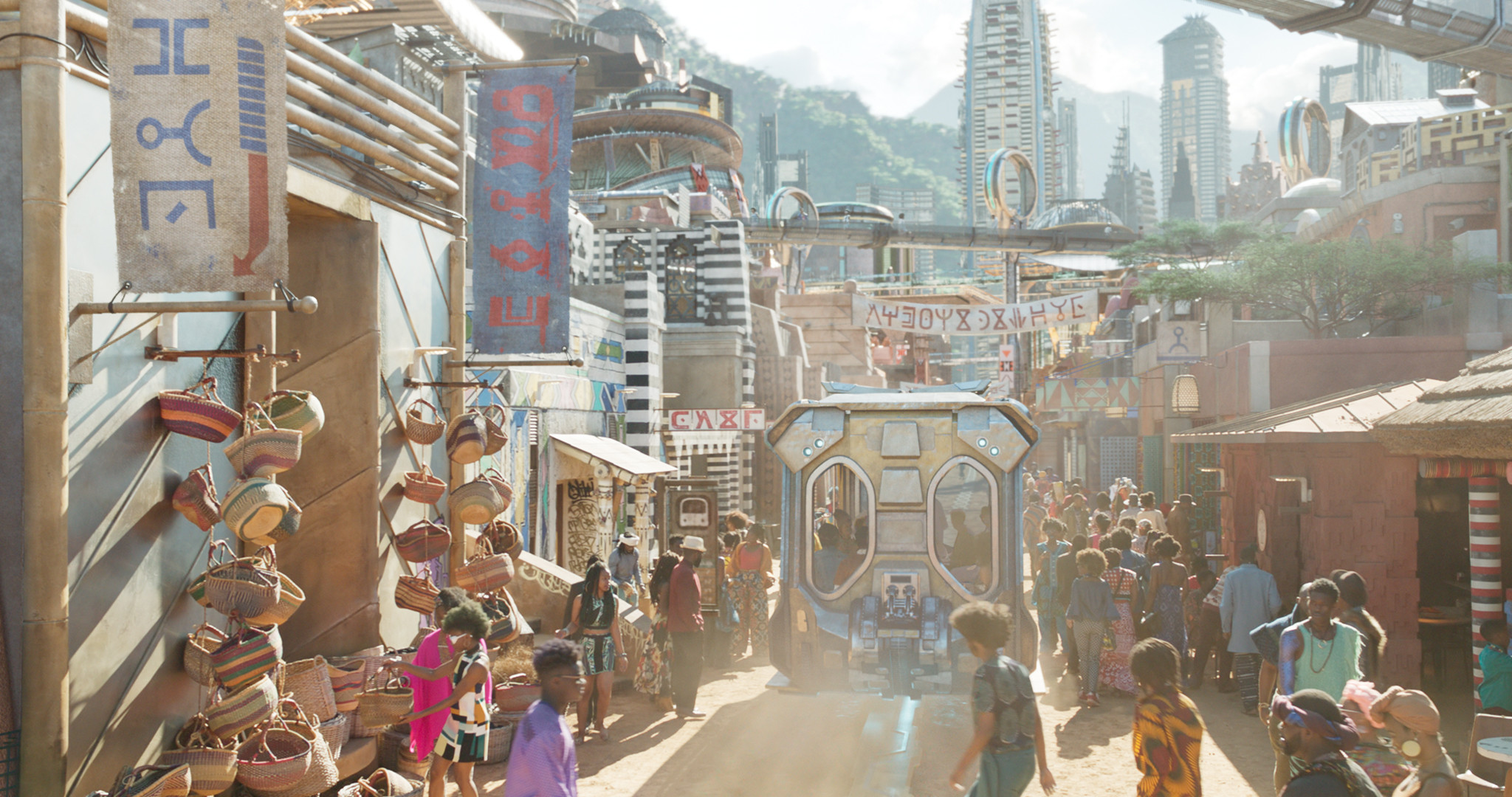 The glyphs on the rightward sign are difficult to make out and may be part of the logographic script, but those on the leftward sign read "DJO" in the Wakandan script -- as neither DJO nor OJD are allowable clusters in English, it seems unlikely that this is a portion of an English word transliterated into the alphabet.

However, it definitely is used to transliterate English even outside of the title cards. Let's look at the text on the throne in this poster: 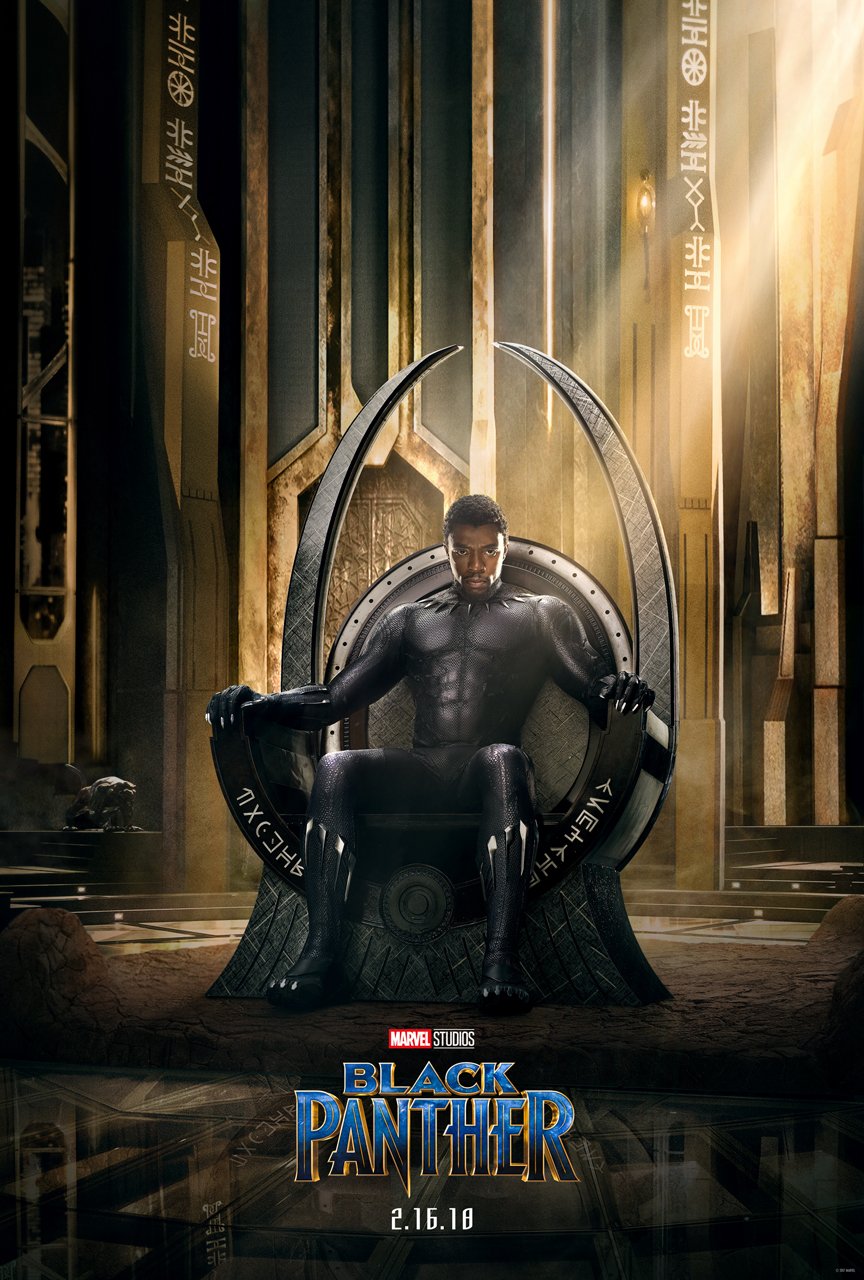 The text on the lefthand side of his throne clearly reads "WISDOM" and the righthand text reads "LOYALTY" -- obviously an English transliteration. This is particularly egregious given that this is the king's throne, which arguably shouldn't feature the modern Wakandan script at all, much less Wakandan being used for English. However, it is admittedly a poster, so it's not really properly in the movie -- I cannot find a screenshot of the base of the throne from the actual film, so I can't say whether the text is the same there.

The alphabetic script is frequently used in the set design of the lab, but the only screenshots I can find of it are either too blurry to make out or just feature simply the glyphs overlapping each other for aesthetic in a screensaver-esque fashion.

Not the answer you're looking for? Browse other questions tagged writing-systems classification or ask your own question.

13
Is there a specific term for a constructed writing system purportedly used for a conlang but actually for a natlang?

11
With the death of CSUR, has there been any new Unicode proposal for con-scripts?
13
Is there a specific term for a constructed writing system purportedly used for a conlang but actually for a natlang?
8
Is there a stroke order for any of the Klingon alphabets?