Can programming languages be categorized as conlangs?

Let say a "Hello, World!" program as the example. 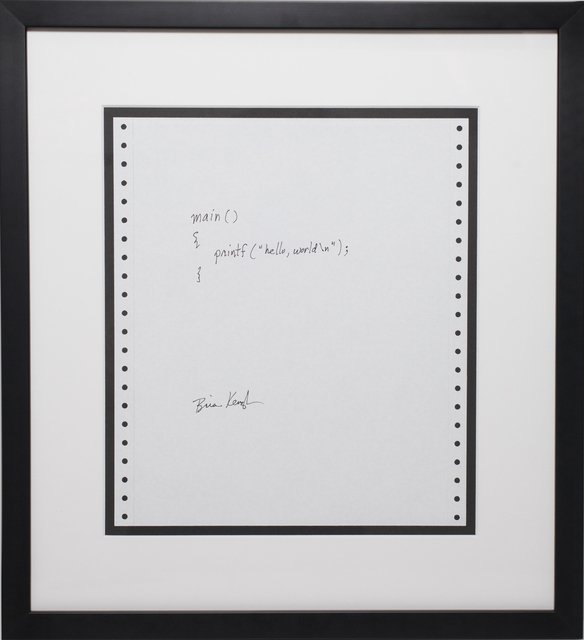 No. "Constructed languages" on this site refers to artificially created languages for intelligent beings, not machine languages. In the absence of another qualifier a "language" is, as I wrote on another site, a system for communicating propositional and conceptual information to other beings. This is different from communication. Programming languages can definitely be used to communicate - and they carry meaning - but that doesn't make them languages. Purely referential communication (using symbols to directly refer to things in the world without metaphorical extension) is not enough to be a language, language must be able to communicate abstract concepts that are beyond any sensory or referential basis. Programming languages are systems for encoding instructions for machines, and not general purpose concept exchange systems.

Programming languages are constructed, but they are not languages, in the sense English or Esperanto or Klingon are languages, as curiousdannii shows. We cannot translate things like "I will be late for dinner" into a programming "language". And a characteristic of all "languages", properly speaking, is their mutual "translatability".

As a programmer and a conlanger, I'd say "no". As noted above, programming languages cannot convey metaphor, emotions, sensory impressions, and other such human-relevant messages. Abstraction they can handle, but only abstractions that are relevant to the processing going on inside the machine. Such languages have an extremely limited sphere of reference: bits, bytes, and data structures inside the machine, and operations upon them.

In the novel "Autonomy", when robots speak to each other, they author expressed it in a source code-like English, with a few things you'd see in coded implementations, like mentions of files, message headers and acknowledgements, and so on. Obviously this wasn't a full implementation. If a hobbyist did do a working implementation, I figure it would be a conlang.

In Star Wars, the droids are supposed to speak a language. The attested text can't possibly be anything like a conlang, except maybe as a language of just "oh!", "ah!" "ha-ha!" and other emotive exclamations. If someone hobbyist tried to make a droid language, it would be a nice feature if it could both work as a natural language and a programming language.

People have speculated that Lojban could serve as a programming language, as things like Prolog are programs made out of logical statements. I haven't heard of anyone doing so. Lojban syntax is describe with the same tools as are used for writing compilers, YACC.

Obviously, since this website doesn't need to reproduce Stack Overflow, things that are only programming languages and don't have a way to be used as a natural language (except maybe in jest?) are not only not conlangs, but off topic.

Going along curiousdannii's idea of languages for human idea exchange, there's an old joke that Python can be used in place of pseudocode, because of its use of English keywords, relatively little punctuation, and ease of understanding.

Here is an example of Kadane's algorithm, expressed in Python (from Wikipedia):

aruslanovych asserts that languages have to convey emotion, metaphor, sensory impressions, etc. but I think this is a Romantic view. Is the Greek Linear B was used to write not a language since it was used for administrative record-keeping and probably tax purposes?

I take a liberal view in that yes, programming languages can represent metaphors, abstraction, and idioms, just maybe not in the sense we're used to. In fact, computers are excellent at abstract concepts and generalizing, with duck typing, object-oriented programming and reflection. Off-topic, I daresay with deep learning, computers can generalize even better than humans can. And, sci-fi speculation, when robots become just as intelligent as humans, we have to consider their languages as "real".

No programming language can be regarded as a language in that sense.

Riley Martine's example uses python-like syntax. But at the same time it uses real English words to convey the meaning.
Computer is not able to understand the meaning of these words, it just runs code.

Computer just set string "Hello" to variable greetingString and prints it to the screen.
Computer does NOT understand the meaning of the word . For computer it's just a computer variable value, nothing else.

I'm trying to be Devil's Advocate here: In a way programming languages are constructed languages, but they are usually very specific and narrow in focus: one could view them as sublanguages aimed at expressing algorithms or annotating other information. An example for a human sublanguage would be the language of recipes. Words that have multiple meanings in English generally have only one specific meaning in a sublanguage. The syntactic structures are simplified, and often different from general English. Certain aspects of the range of human expressions are left out or limited (you might talk about emotions or feelings, but they would only relate to the food mentioned).

You could design a programming language that is suited to expressing recipes, and it could be used to drive a cooking robot. That programming language could also be read by humans, who would understand the meaning of it, and could translate it into other languages. In this sense 'programming language' is a bit of a red herring: it's just a formal representation of meaning. And (propositional) meaning can easily be expressed in predicate calculus or related formalisms. Is CD representation a conlang, or just an abstract representation of actions/states? It can certainly be transformed into any number of other languages (natural or constructed), and it can express a reasonable range of human activity.

Where do you draw the line? At what point does a constructed language cross the boundary between being simply a mark-up or programming language to being suitable for human communication? What is the essence that, say, HTML, is missing, but that toki pona, Klingon, or Esperanto have? Note: I'm not suggesting that HTML is a conlang, but it can be used to encode a specific kind of meaning, and XML can even encode semantic relationships. But they might not be very suitable for inter-human communication.

You could, though, envisage two people with no common language between them who use a programming language to work together on solving a problem. It would be tough, but should be possible.

I would say, to a very limited extent, that yes, they can be, but only as a proxy grammar for other languages. For example,

(source: Coding in song - Representing music lyrics in a programming language of your choosing)

However, this isn't a great method of communication. Programming languages are not designed with the same intentions as conlangs.

Not the answer you're looking for? Browse other questions tagged terminology classification or ask your own question.

8
Is mathematics considered a constructed language?