What significant traits are found in conlangs and not in natlangs? [closed]

Want to improve this question? Update the question so it focuses on one problem only by editing this post.

Recently I encountered the acronym ANADEW, which I found to mean A natlang's already dunnit, except worse. Pondering a comment from Logan R. Kearsley where he speculated that "... it's mildly positive in naturalistic circles, since if a natlang already does it, you know you're justified in using it." I began to wonder what did not eventually fit in the ANADEW concept.

I gather that Lojban might be unique in its strong attention to being logical, as explained in two excellent answers to What makes lojban such a “logical” language?. If it is not unique, at least it still is something that I don't thing any natlang has as a strong point.

In the short time that this site's been open, it has struck me that conlangs might be improvements in one way or another over natlangs, yet despite their diversity, they haven't matched the diversity, and utility, of natlangs.

So, what I'm wondering is, other than Lojban and its "logic" is there some other significant traits that some human conlang has which is not found in a natlang somewhere?

I wouldn't consider using never-before-heard sounds as significant, though that's been mentioned in another question. I would have considered having a super minimal verb set significant, as in Kēlen, except that, well ANADEW, or in this case maybe better.

Full disclosure, I am not a conlanger, likely never will be. Nonetheless, I find many fields interesting, and created languages is one of them. With that in mind, please excuse some of my oversights or misconstrued concepts.

There are a broad range of answers possible here and it would be impossible to list everything. In general, it is rather easy to come up with a feature that does not seem to occur in natural languages: simply take a feature every language appears to possess (for example: phonemes, verbs, hierarchical syntax that can be described with syntax trees, a very large amount of words) and reject it. Then see what you can do with the language. This leads to so-called Engelangs, short for “Engineered Languages”.

Alternatively, one can from the ground up decide to build structure from a different “philosophy”, e.g. build on predicate logic, or stacks (the CS concept), or… well, whatever you can think of that can organize information, really.

To make an example, there is Ithkuil. Ithkuil does not strive to be a naturalistic language. Instead, its goal is to allow for unambiguity. Among the things it does to provide that are a range of grammatical inflections not found in any natural language - too many to list, but one example I can make is its case system. In most natural languages, case is something of a helper to syntax. Case marks words for their syntactic roles and thus helps create the structure necessary to understand a sentence. In Ithkuil however, case marks semantics. The sentence “I hit you” in ithkuil would require different cases for “I” and “you” depending on whether e.g. I was a volitional actor, or whether the hitting was an unavoidable circumstance, or an accident, or mediated by someone else… While traces of such systems are found in natural language, none get even close to the extreme of Ithkuil.

Finally, an interesting anecdote is the Conlang Trigger System, a novel way of structuring languages employed in naturalistic conlangs (i.e. ones striving to be mistakable for natural languages). The trigger system developed from misunderstandings of the way certain Austronesian languages (such as Tagalog) work. It’s a perfectly plausible system… just not actually attested in natural languages. I believe there’s a nice writeup on the whole topic, but cannot find it right now.

Whilst I also think that this question is too broad as you could argue that almost all conlangs that weren't created to be "naturalistic" have some feature never before seen in a natural language. Wikipedia talks about many a priori languages which, by definiton, contain features not based on existing languages. With that being said, here are some of my favourite (perhaps less well known) philosophical languages that are vastly different from all natural languages. 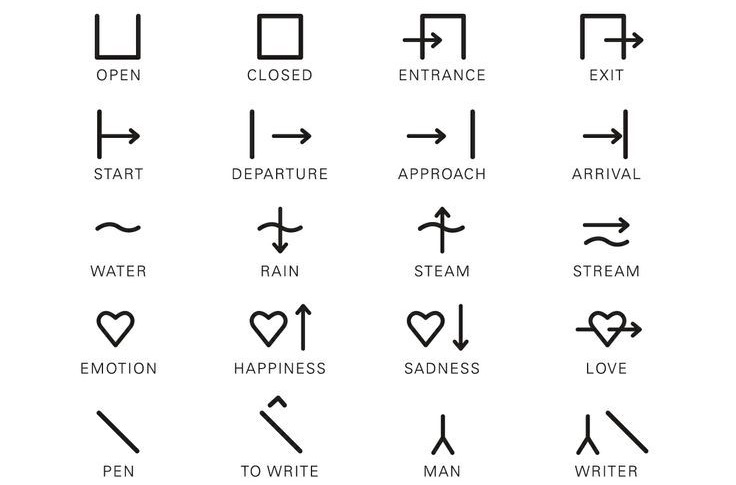 (Examples of Blissymbols stolen from All Things Linguistics)

14
What makes lojban such a "logical" language?
12
Can Kēlen truly be considered verb-free?

18
What is the difference between an Isolating and an Analytic language?
8
What are some options for alternative contrasts in demonstratives?
11
How similar are Loglan and Lojban?
9
What are the common features of "Elvish" conlangs?
5
How long do words get in other languages, and how hard are long words to say or read?