How could the future "Kesh" language from the book "Always Coming Home" by Ursula K. Le Guin develop from modern languages?

In the book Always Coming Home, by Ursula K. Le Guin, the author created the future Kesh language and Aiha alphabet. Does anyone with an anthropological or etymological background and experience with this book have any idea how modern languages would evolve into this? Could it just be English + 5000 years, or does it seem like there's other languages that got mixed in?

From the back of the book it is stated that their written language and spoken are completely separate things and are not interchangeable which is quite a shift from modern English, but it seems like they may be many thousands of years in the future which would allow for such drastic changes. Some words such as "kailikú" for "quail" have the similar hard /k/ and "sleep" is translated to "lahe" which seems to be pronounced similarly to "lay". These seem to be fairly rare and most words have no obvious connection or similar pronunciations. 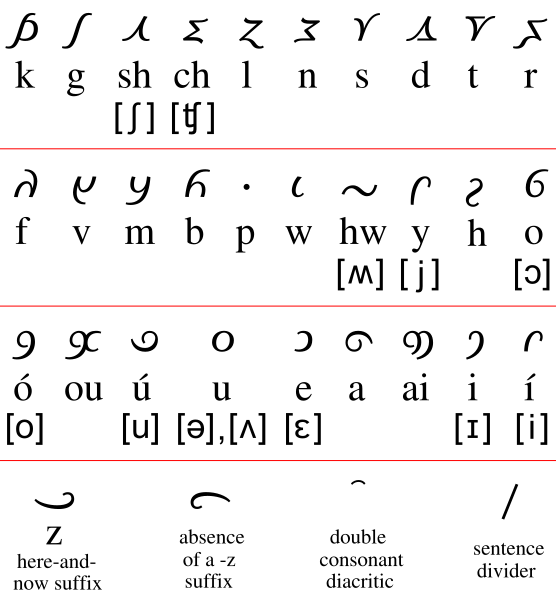 5000 years is a really long time for linguistic evolution, and after such a long time little resemblance between the original and the final outcome is left. So almost anything is a plausible outcome.

The feature "written language and spoken are completely separate things and are not interchangeable" has a nice scientific name alloglottography and it was quite common in the Ancient Near East. I wonder how it can survive in a society Ursula LeGuinn describes for the Kesh people because it is definitely harder to maintain than the knowledge of a simple alphabetic writing of the spoken vernacular.

The alphabet looks like a new invention but it shows some superficial similarities to Canadian Aboriginal Syllabics and may have evolved from them. Or it was just reinvented at some point of time after a period of illiteracy.

Not the answer you're looking for? Browse other questions tagged morphology inspiration or ask your own question.

10
Is there a practical lower limit to the number of morphemes required in a language?
9
What are common origins of accusative case markers?
3
What language uses the most amount of phonemes?
5
How can I explain the origin of the dual number in my Slavic-influenced East Nordic conlang?
9
How to develop a detailed, realistic a posteriori conlang?